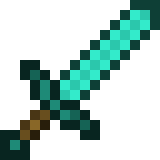 The Atomsplit Katana is a Sword that is meant to be used against Voidgloom Seraphim. It is an upgraded version of the Vorpal Katana and the final upgrade of the Voidwalker Katana line.

It requires Enderman Slayer LVL VI to use.

Diamond Sword to a