Current Article of the Month! 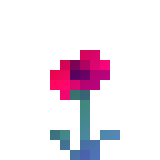 Ability: Heat-Seeking Rose   RIGHT CLICK
Shoots a rose that ricochets between enemies, damaging up to 3 of your foes! Damage multiplies as more enemies are hit.

FLOWER_OF_TRUTH
The Flower of Truth, commonly abbreviated to FOT, is a ​​​​Legendary Dungeon Sword crafted with 9 Ancient Roses. Its item ability deals melee damage to mobs at range and ricochets off mobs onto others a maximum of 3 times.

Ancient Roses can be obtained from Dungeon Post-Boss Chests or as a rare drop from Woke Golems in Catacombs Floor 6.

The Flower of Truth can be used for melee, like any sword, and for its long range ability. It has no requirements.

When its ability is used, it shoots a rose that can travel up to 20 blocks before disappearing. After travelling 5 blocks, it homes in on enemies within 10 blocks. Upon hitting an enemy, it bounces to another enemy up to 2 more times, for a maximum of 3 times. The homing rose's damage is doubled on the first bounce and tripled on the final bounce. When it hits a block, it is destroyed.

The ability has a cooldown of 1 second and uses 10% of the user's maximum Mana on use. It is affected by Ultimate Wise. Unlike other abilities, the damage does not scale with ✎ Intelligence or ๑ Ability Damage. Instead, it uses the same calculation as melee damage, including factoring in critical damage. Enchantments that do not work on mage weapons, such as Syphon,[1] Life Steal, Sharpness, Cleave, and Mana Steal, as well as ⫽ Ferocity, do not work with the ability.

This sword can be upgraded with Wither Essence.