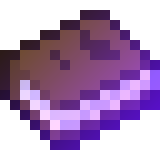 Use in an anvil or Reforge Anvil to combine this book with a weapon or armor piece to gain a small but permanent stat boost!

This book bypasses the Hot Potato Book limit of 10, allowing you to upgrade an item up to 15 times!

The Fuming Potato Book can be obtained as a drop from dungeon chests or bought from the Bazaar. It gives a small stat boost to weapons and armor. It works similarly to the Hot Potato Book, but it is able to exceed the 10 book limit, instead being limited to 15.