"The man called it "true-silver" while the Dwarves, who loved it above all other things, had their own, secret name for it."

MITHRIL_ORE
Mithril is a resource in the Mining Collection that can be obtained in the Dwarven Mines by mining Mithril veins, using a pickaxe with Breaking Power 4 or higher.

Collecting mithril increases the player's mithril collection and can grant useful items or perks upon collecting a specific amount of mithril. Mithril collection contains many good recipes, including Dwarven Super Compactor and Beacons.

Mithril can be mined from Mithril Veins, where the inside is harder to break and gives more Mithril, but the outside breaks quicker and gives 1 Mithril. From the easiest to hardest to mine, these veins are made of Cyan Hardened Clay, Gray Wool, Dark Prismarine, Prismarine Brick, Prismarine, and Light Blue Wool. All ores in the vein give 45 mining XP. However, there are some veins which are not purely Mithril and give only 20 mining XP. 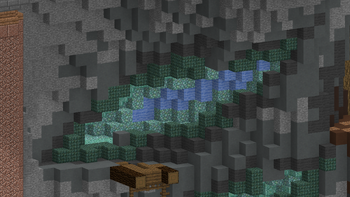 The amount of Mithril players receive from mining ores is as follows:

Mithril sells for a relatively high amount of money at the Bazaar and therefore is a good money making method for early game players.

Retrieved from "https://hypixel-skyblock.fandom.com/wiki/Mithril?oldid=218703"
Community content is available under CC-BY-SA unless otherwise noted.