Edit
watch 02:59
Wiki Targeted (Games)
Do you like this video?
Play Sound 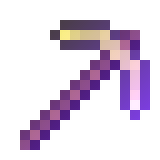 Comes with the enchantments:

STONK_PICKAXE
The Stonk is an ​​​Epic Pickaxe with a

Breaking Power of 1, meaning it can only mine Stone, Coal and End Stone. It has the texture of a vanilla Gold pickaxe. Its base

Mining Speed is 380, before the bonus from Efficiency VI.

The Stonk can be purchased from the Pearl Dealer in The End for 499,999 coins.

Silex cannot be applied to it.